Steven & I (Jane) are forty something’s who made the decision in 2013 to make more of the opportunity to travel.  Already seasoned travellers (usually by air) we were looking for something more permanent to aim at. 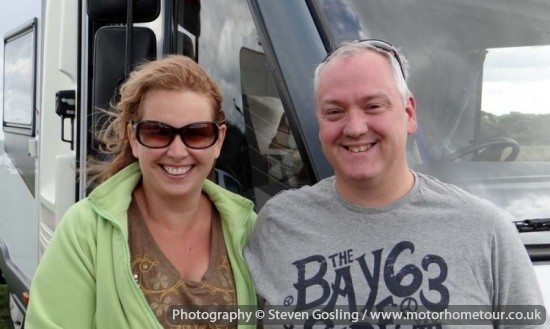 This followed a particularly stressful work period for Steven alongside my redundancy at the beginning of 2013. Having asked the question “if we could do anything what would we do?” Steven found a great “little” blog by Julie & Jason at www.ourtour.co.uk and found a new idea – “what about motorhoming?” he said.  I have to admit it wasn’t something I even had in my consciousness, but soon the idea of being “at home” wherever we went was becoming more and more appealing.

That was in April 2013 and in July 2013 we bought our first motorhome – now called Ellie.  Everyone said we would never get what we want first time but have to say we got pretty close due to a lot of patience, seeing a lot of vans and a solid knowledge / belief that we could get what we wanted to for the money we wanted to pay.  The van that we would want now is nearly 10 times the price we paid for Ellie and nothing we’ve seen has come close so far so our little beauty.

At the time we bought Ellie we had an elderly cat (Nancy) who was in need of daily medication and although we tried her on a couple of trips around the block she really didn’t like it, so our plan to depart for a year or so in Spring 2014 was put on hold.  Sadly she passed away in December 2014 which was also just after our plans for the next couple of years had been revised.

We are currently on a path to having enough passive income (through property development etc) to sustain a permanent travel lifestyle by our fifties, so again the permanent travelling has been put on hold, however, that doesn’t mean we aren’t still suffering wanderlust and continue to travel both by air and by motorhome for over 3 months of the year.  Luckily we both have work which supports this as Steven is a fabulous web designer (of course I’m biased) and I am a freelance corporate trainer and coach as well as having the occasional short term contract as a project accountant when it fits in with our holiday plans.