Leaving St. Tropez we headed along the Cote d’azur a little longer enjoying the beautiful scenery in that area and wishing we could afford a small plot of land there.  The building planners in that area have done a fantastic job of packing lots of houses in without really noticing that they are there.

Our stopover was in the hills back from the coast in the sleepy village of Cuges les Pins which was only €3 for the night – actually it worked out free as we couldn’t work out where we were supposed to pay but I would happily have paid.  A treat was the visitors we had during breakfast who seemed very used to getting a few scraps from the overnighters. 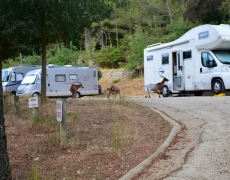 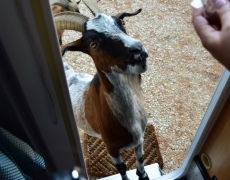 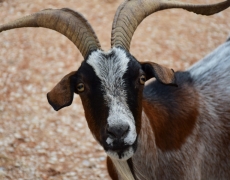 Arles was our next stop which is one of three remaining bullfighting capitals in France all based in the south.  We discovered this as through the observation of a city heaving with people, 7ft barriers being put up around the streets aswell as multiple posters about the season finale which was taking place that weekend.  My first reaction was disbelief and then a tinge of curiosity.  After parking up we headed into the pretty town which features a full Roman coliseum and amphitheatre still used for bullfighting and other events – we know this because there was actually a bullfight going on that evening in the coliseum followed by a bull run through the streets.

I don’t agree whatsoever with the torture of animals however I also respect choice and tradition and as such was curious, I can see both sides of the equation in that the bulls are bred purposely for the events and this generates an entire industry but what is the purpose really?  As we were waiting for the bull-run we got talking to a very helpful German.  He told us that his observation is that the bulls are revered more than the Matadors and that they are frequently honoured by the crowd after they inevitably die.  We also happened to see footage of a bullfight on a TV screen and I felt comforted that the Matador didn’t seem at all elated that the bull was dead, and it seemed like he was ashamed that he hadn’t done something better.  Apparently the bullfight takes about 30 mins in total.

We watched the bull-run which lasted about an hour.  There were 8 horses and 4 bulls which ran up and down in different configurations.  Young lads tried to separate the bulls from the pack but none succeeded although one got quite close which made for some impressive photos.  The horses are specially trained to lean into each other to stop the bulls breaking through and it all seemed more of a show than anything horrific, there was a thrill in the air and the chances of one of the lads getting injured seemed pretty high which I felt was retribution for the show on display. 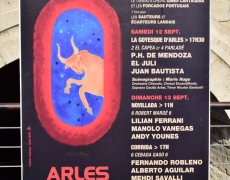 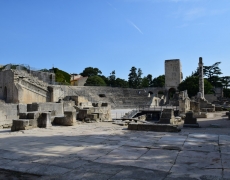 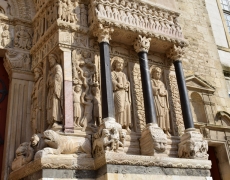 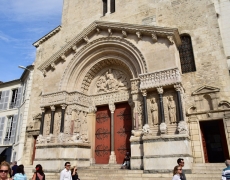 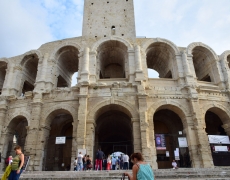 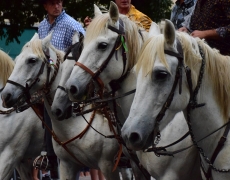 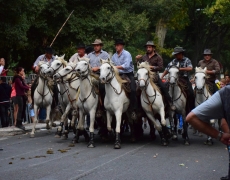 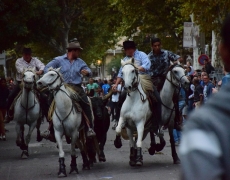 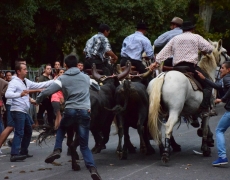 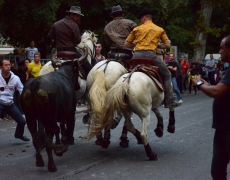 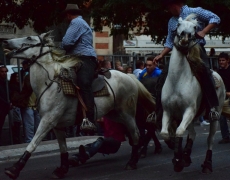 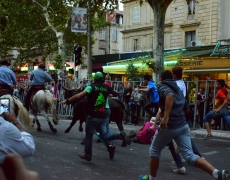 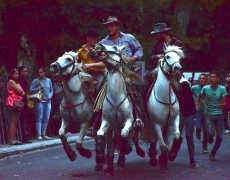 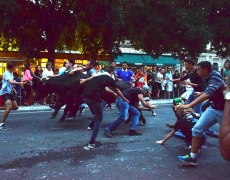 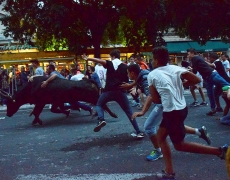 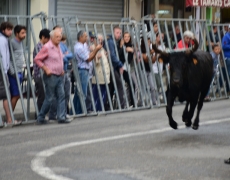 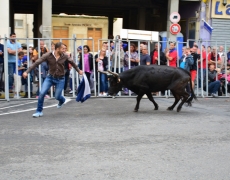 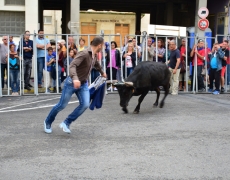 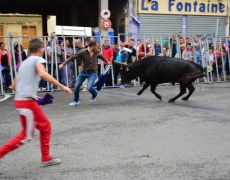 The next morning was different, this time they had only one bull out on it’s own which ran out from the truck in a circle and back towards the truck, again the lads tried to touch the bull or be a matador for a minute or two.  However unlike with the horses the bull couldn’t get back in the truck until they let him and while chasing the lads it slipped on the cobbles several times as well as kept trying to return to the truck to escape.  It was pure teasing and the bull sounded distressed by the noises it was making and it’s desperation to get back in the truck.  At that point it was beautiful scared beast and I couldn’t bear it’s suffering so I had to get out of there.  I sobbed for a good few minutes before calming down and it’s not something I ever want to see again but it was an experience I won’t ever forget.  I’m still respectful of the tradition of it but I question the necessity of it, surely there must be another way of honouring these magnificent beasts?