Losheim Am See was our next stop on a Stellplatz very near to the local lake which was an absolute godsend in over 30 degree heat – our van reached over 40 degrees at one point and even the breeze was hot.

After arriving and setting up in some shade we headed down the lake side for a refreshing swim.  We clearly weren’t the only ones having this thought as the area was covered in fellow sun seekers & hiders all trying to get some relief from the heat.

This has been an unusually hot summer in Germany and throughout central Europe and everywhere the land is dry and arid although I get the impression the harvest is going well.

After dinner we headed to the bar next to the hotel and had our first Radler beer, the first 1/2 pint I had disappeared in about 2 mouthfuls – it was soooo refreshing.  It’s basically a light lager with lemon added and it is brilliantly refreshing.  I doubt very much it will be the last one of those I/we have on this holiday!

The ongoing saga of the lack of internet access in Germany continues with us resorting to McDonald’s to gain some access.  It seems for a modern country internet is not something high on the agenda.  You can read all about why internet access is so important in Steven’s posts about the topic which is very close to his heart.

Due to the particularly hot night I decided to sleep in the dinette area of Ellie on the airbed – unfortunately though, miscommunication bit me in the bum and we hadn’t brought anything to blow the damn thing up – in 30+ heat everything gets more difficult so a few choice words were had.  All was resolved the next day though with a visit to Globus and a new 12V pump (identical to the one we have at home!) was purchased.

After a morning spent in McDonald’s we headed along the Castle Route and into the vast and impressive wine region arriving at Bad Dürkheim late afternoon.  We parked up on a big Stellplatz less than 100m from the main town car park and while there was EHU available it was already fully occupied by other snake like leads. 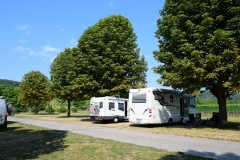 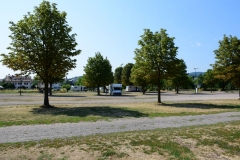 Again the temperature was in the mid 30’s so we took a slow wander into the centre to find something to eat.  Hmm, for some reason the town seemed… well shut to be honest.  Hardly anywhere was open.  We eventually decided on a restaurant made from a huge wine barrel – like I said it was a BIG barrel.  The food was fantastic and there was a very slight zephyr of a breeze which we made the most of sat outside.

Afterwards we headed over to something we’d seen on the drive into town which we were both rather curious about.  It was a long, tall & thin barn like building which appeared to have water dripping down it.  On further inspection and investigation it is actually a filtration system for the local salt water spring.  They harvest the salts on a regular basis which are full of minerals plus the dripping of the water creates fresh, cool air which was beautifully refreshing.  In addition there was a really fun water play area around the bottom of it, where if you worked the see-saw it pumped water up poles and sprayed it everywhere. Another activity was to create a geyser when you rocked the associated mini see-saw.  For the engineer in me it was fantastic and I could have played there all evening!