Changing the table in our motorhome

Changing the table in our motorhome

When we bought our new-to-us Frankia motorhome at the end of 2015 the dining table seemed to be a nuisance. It was too large for just the two of us. It’s was very adjustable being on rails on the floor and having further adjustment on the table top itself but it still kept getting in the way. It had to go. The sliding mechanism was also heavy and I have a thing for reducing as much weight as possible in the van. 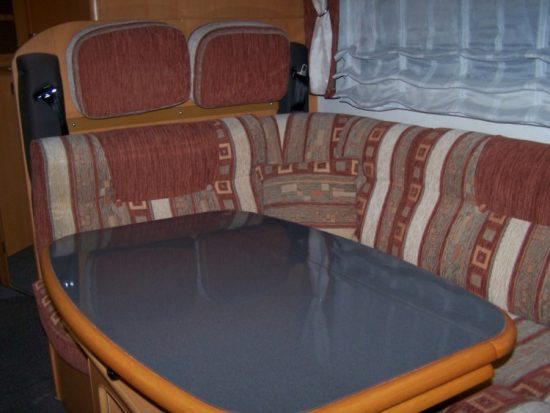 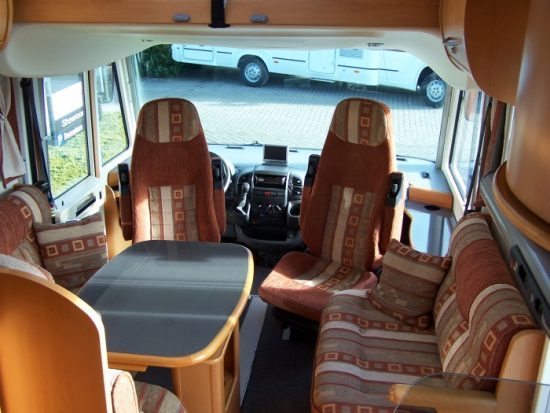 I removed the table and sliding mechanism. What a difference! The lounge area now feels like a lounge with lots of space to stretch and move. Removing the table and support removed approx 15kg of weight from the van!

But what to replace it with?

The next week we found ourselves in an Ikea store. They had a small laptop table which was smaller than I had intended but thought it would be a good test. It was only £15 so we bought one, put it together and used a few times and it worked out fine. The original Ikea floor stand was not stable enough so I searched for table solutions and found a swing arm bracket which is normally built for VW campers but would fit anything. It’s a large steel tube that’s curved at the top with fixing brackets for the floor and table top. The swing arm cost £55 – see photo below… 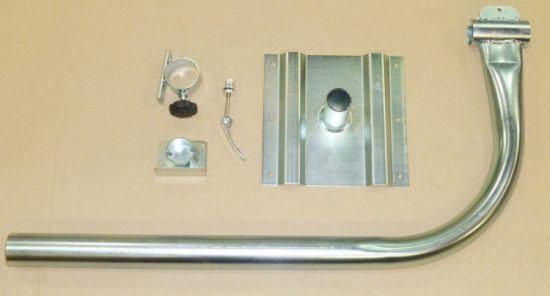 The wooden arm on the nearby seat needed shortening so this was carefully removed and a local joiners shop cut about 5cm off the arm and I glued it back on – they did this for free!

Next the mounting brackets for the swing arm needed fitting which was quite easy – one on the floor and the other approx 30cm above to steady the arm.  The swing arm was a little too tall so we also had the tube shortened by approx 7cm as a favour from a client of mine who also happens to own a local metal work company.  It’s amazing what people will do if you ask nicely!

Next the table top from the Ikea table was removed and fitted to the new arm – we fixed onto one corner to make it more manoeuvrable. The Ikea table top was thin MDF so careful choice of screws was needed so they didn’t come through the top.

It’s fitted. Not only does the table swing out the way when not used but can swing in to place and then the table top itself turns and is adjustable so the table top swings independently of the arm.

The table top is enough for two of us to eat from and for me to use my laptop but time will tell if we may need to change the table top for something slightly larger. (Edit – we are finding it a little too small for eating from so will be looking for a slightly larger table top!) 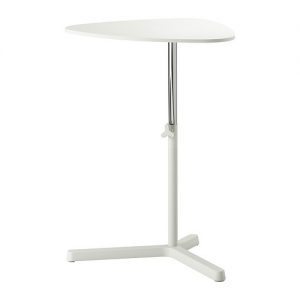 Above is the Ikea table we bought. It is also available in Black.

Here’s some photos of the new table with the arm (Edit by Jane : you may also notice we now have some new snazzy carpet in which is much better!) 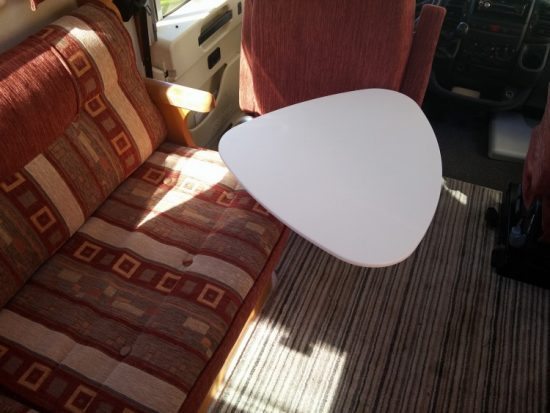 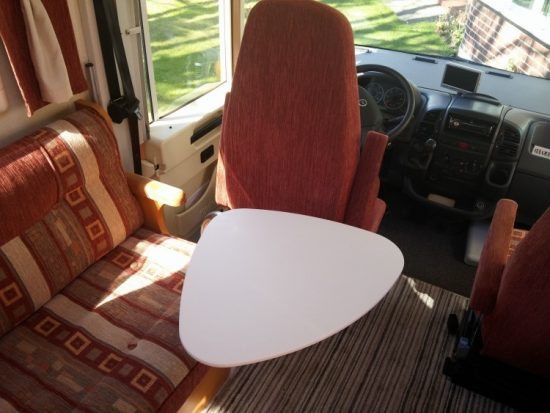 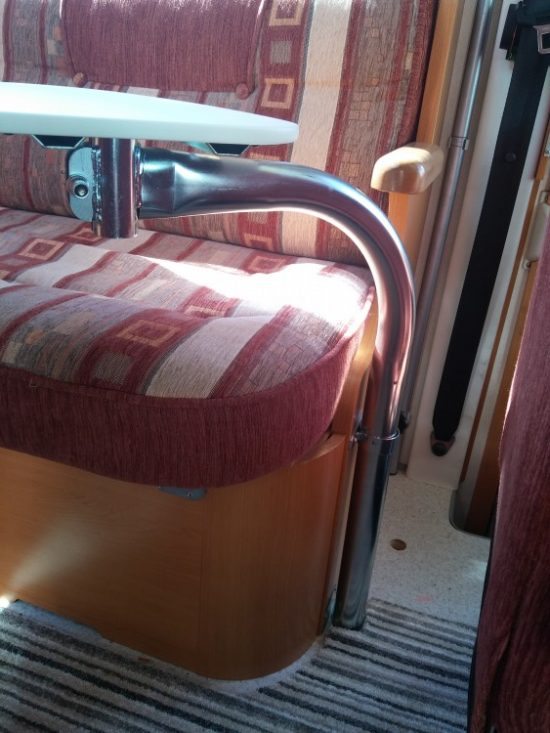 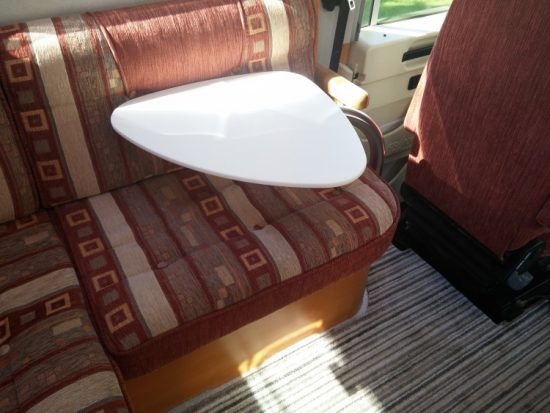 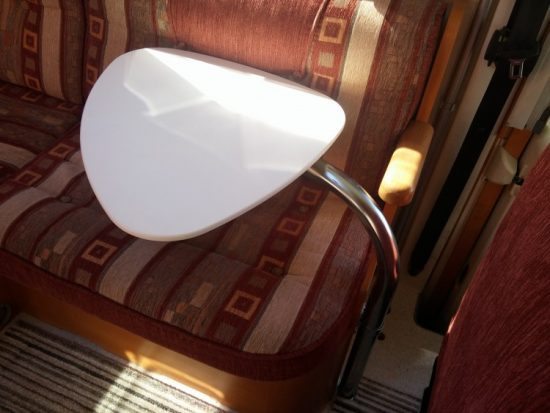 Edit, 15/08/2016 – After a few months we have found the new white table to be too small. So we bought a new one which is slightly larger (still smaller than the original) and mounted this to the new curved table arm – see below. 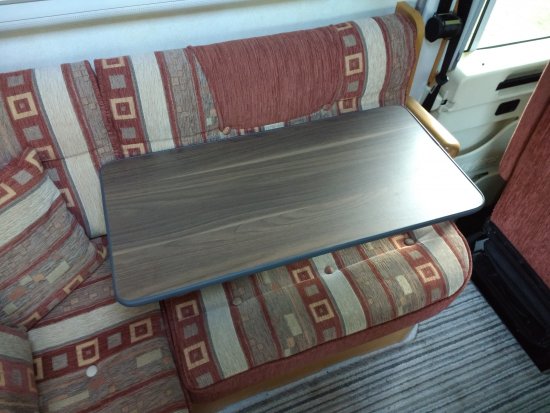 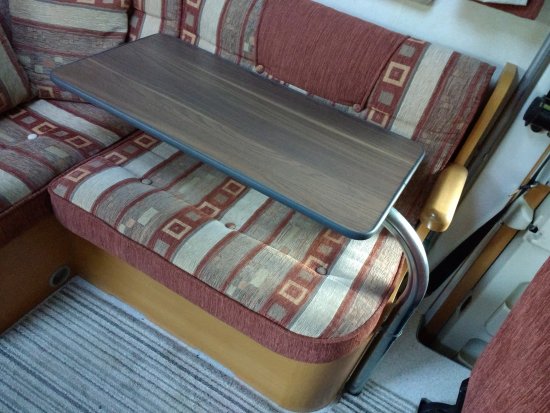 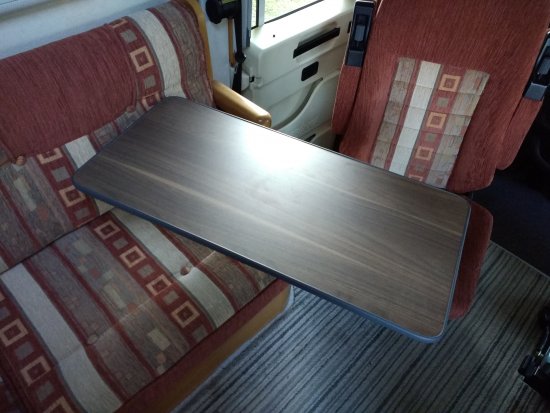 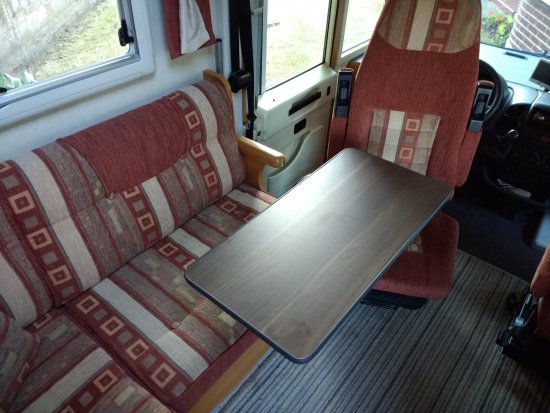