Important: This post is a work in progress so will be updated with new info as and when available.

If you are on the fringe of a wifi signal then the signal can be slow and unreliable. Also if the signal is strong but with other wifi signals on the same channel (frequency) this can also cause problems.

To find the best signal I use some software called Inssider. This software will show you all the wifi signals available as well as strength, channel numbers, encryption, etc. The latest version 4 of the software is no longer free but the older version 3 still works well. Here’s a link to the older inSSIDer version 3 software for Windows.

(Please note that I am not distributing this software, this link is for my own reference only and you click on it at your own risk. Please use with caution and virus check any files you may download.)

There is also an excellent free app available for Android called Wifi Analyzer. Unfortunately there does not appear to an equivalent for iphone or iPad.

The built in wifi antenna within your laptop or tablet will normally pick up a good wifi signal. However if the wifi source is some distance away then these small antennas are simply not sensitive enough.

To extend this range there are several different devices around but one of the cheapest and easiest is a USB wifi antenna. These simply plug in to your laptop and can pick up a reliable wifi signal up to 1000m away. Even in rural areas I found it rare not to find a signal to use.

There are typically 2 different types available: omni-directional (1st photo) and directional (other 3 photos). 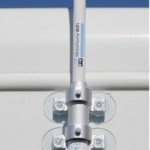 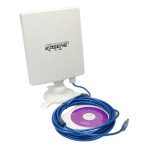 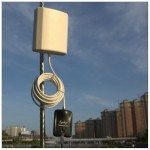 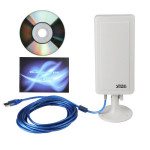 The omni-directional antennas are the simplest to use as they will pick up signals from all around. The drawback is they are less sensitive and can often pick up multiple signals on the same channel.

The directional antenna (which we have) take a little longer to setup – up to 10mins – but can find much weaker signals and make them usable. If you can see a property nearby which may have some wifi available then simply point the antenna in that direction and it should work very well. We have sometimes been in rural areas of France and put the antenna up, moved it around and found a usable signal with no properties or buildings in sight.

Many mobile phones will allow you to create a mobile hotspot and connect or tether (subject to your tariff) and allow you to connect multiple devices to your phone and use the mobile data connection.

We occasionally find that camp sites may charge for wifi on a per device basis. This can become expensive especially as like us we have 2 laptops, a tablet and 2 phones. We recently stayed in Tenerife (not a motorhome trip!) and the resort tried to charge €27 per device per week to connect to their rather slow broadband.

To counter this we use some software which can turn your laptop into a mobile hotspot. We trialled numerous different hotspot applications and most were poor or full of malware. The software we found was best is called Connectify. This allows you to take the one single wifi connection and redistribute it from your laptop. The new hot spot has its own name and password so is fully secure. Connectify is easy to setup and use. We normally use it together with our directional usb antenna. Conectify is not free but only costs about £15.

Adam and Sophie over at Motorhomewifi.com have developed a combined antenna and hotspot system. I don’t have any experience of it but they are extremely helpful and I understand it works well (happy to review if they wish to send me some hardware!). They are often found at the motorhome shows and exhibitions.

These are normally stand alone hardware devices that connect to an existing wifi signal and then either extend (often called bridging) or re-broadcast its own wifi signal. We have a Netgear Trek. This either plugs into the mains electric or runs from a usb connections and works very well. The Trek will connect to the local wifi signal (even if its a slow or poor signal) and then create its own password protected hotspot and your laptop or other devices connect to it.

The Fon network is a shared network of mostly private wifi networks. In the supporting countries the broadband routers of the ISP (in UK this is BT and in France it is SFR) have extra software installed that creates an addition open wifi access point which other Fon network users can connect to. In the UK if you are not a BT broadband user then you can also purchase a Fonera device which shares a small portion of your broadband connection and in return allows you to connect to other Fon access points worldwide. If you find a wifi spot called “Fon WiFi”  this is from a stand alone Fonera device. Fon can be a little slow as only a small portion (around 256Kbs) of the connection is shared but it is normally perfectly usable.

Because Fon is shared from mostly private residences, residential areas is where you will more likely find a good Fon spot.

Globally Fon claim there is over 15 million Fon spots available.

As of July 2015 these are the countries where Fon spots can be found:

Germany – Deutsche Telekom, this is a relative new partner and the network is still very small. Look for Telekom_FON

Spain – Vodafone. The Fon maps show a huge array of wifi spots in Spain but they are named _ONOWiFi

Other countries include Japan, South Korea, USA, and Brazil, but I don’t have any details at present.

You can find an interactive map of all Fon spots here: https://corp.fon.com/en/maps. The map is slow to use but can be a handy resource.

In the UK all BT provided routers have Fon switched on by default but this is not the case in all countries. I believe in France Fon is switched off by default.

If you have read all of this post then you will know that getting a good Fon signal often requires a good wifi antenna. If you are 100m away from a known Fon spot with a normal tablet or laptop you are unlikely to be able to connect.

Some people report bad experiences with Fon and say they cannot connect or it is slow or unusable. In my experience it is rare not to find a usable signal in countries that have good coverage (such as UK and France) and to be able to connect when you have the right equipment.