Motorhome Wifi – extending wifi from outside into your motorhome

Motorhome Wifi – extending wifi from outside into your motorhome

I am a web designer with a background in IT and electronic engineering. I love the challenge of making or inventing little (and sometimes big) improvements to my motorhome. As a web designer I need regular internet access. We don’t often stay on camp sites and often use FON or other free wifi connections. Often these are low or poor signal due to the wifi source being some distance away or obscured by buildings or trees.

Previously I had used a directional USB antenna fixed to the side of my van via a suction mount. This has worked well until the antenna met with an accident and fell off damaging the cable. The USB method is still an excellent way to connect a single laptop but falls short if phones, tablets or a second laptop need to connect.

So I needed to find a solution that will still suck in the distant wifi signals but allow multiple devices to connect at the same time. The guys over at www.motorhomewifi.com have created a packaged system that does exactly that. It costs £159 +postage so I though I’m sure I can create something similar for less money. This article is in no way intended to take away from what the guys at Motorhomewifi.com have created. If you want a packaged system that works out of the box then go for that. If you wish to save some money (up to 50%) and have an hour to spare to configure it yourself then read on.

I started searching for the antenna part and noticed that the motorhomewifi.com antenna appears to be made by a company called Ubiquiti (model Nanostation Loco M2 8dbi) and their router appears to be made by MikroTik (model Map 2N). I read a few reviews that the Map 2N was not easy to configure. Then discovered that Ubiquiti sell a matching wifi router that goes with their antenna and its easy to configure and was cheaper than the Map 2N. Further research revealed that Ubiquiti is a US company and have been making wifi kit for commercial and professional applications for over 10 years and have a great reputation for the quality of their kit.

3m flat cat5e network cable in white (other colours plus shorter and longer lengths are available): £2.49

** I made this lead up myself from an old DC power adaptor I had and permanently connected it to a 12v supply (via a 1amp fuse) in my motorhome so didn’t actually buy this part. The DC 5.5 x 2.1mm plug is a very common plug but very very similar to the 5.5 x 2.5mm plug so ensure you buy the right one!

I also manufactured my own mount for the antenna but you can buy the proper suction mount (identical to the Motorhomewifi.com mount) for £15.37. Ubiquiti also sell pole mounts as well which are cheaper. So with a suction mount the total cost is around £86 for the small antenna. Photos below show my self made mount. The pole I already had as its a support for my drop-down bed and the wall mount was a caravan aerial wall mount costing £10.99 from my local camping shop. The antenna is attached to the pole using a couple of tent bands which are very strong elastic bands. The pole allows the antenna to be nice and high (above the van height) and also allows the antenna to be rotated easily. 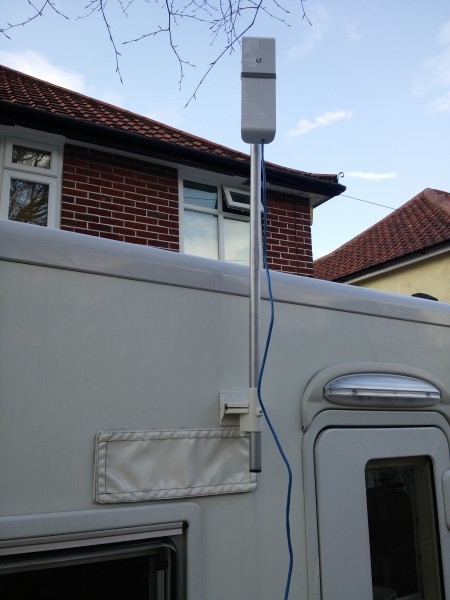 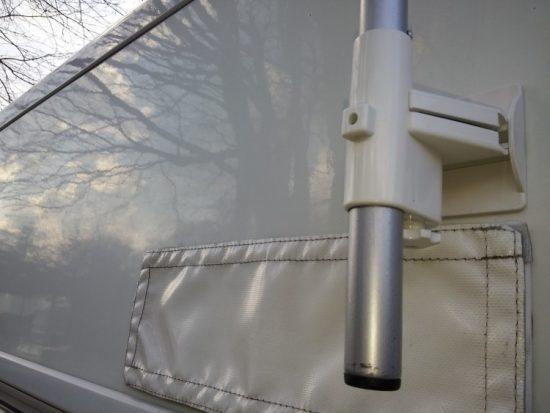 I bought the flat network cable so it fits through window and door seals better than the fat round cables.

Here’s more details about the Kit:

This is available in 2 different models – 8dbi and 11dbi. The figure indicates the width of the beam of the transmitted signal. The 8dbi antenna with its wider beam will pick up signals from a wider (approx. 60 to 90 degrees) area but is less sensitive to weak signals. The 11dbi antenna has a much narrower beam and thus will need more care in aligning the antenna.

Here’s some technical stuff about Antenna gain and strength: A directional antenna can be thought of as a radio frequency camera lens.  A long lens (high gain antenna) is harder to aim because it has a smaller field of view and it requires a stable mount.  On the other hand, a high gain antenna works in your favour twice.  First it focuses your transmitted energy, an 8dbi antenna increases your effective power by a factor of 10^0.8 (6.3 times) and a 11dbi antenna by a factor of 10^1.6 (39.8 times), and it gathers in more energy to send to the receiver (by the same gain factors).  Finally, the one everyone usually forgets, the directional antenna helps reject unwanted signals arriving from other directions so is less affected by interference from other wifi sources.

So, the 8dbi antenna for easier set-up (about 2 or 3 min) but is less sensitive or the 11dbi for weaker signals but takes more time to set-up (about 4 to 8mins). The 11dbi antenna is slightly larger and costs much more at £71.44.

Both antenna’s have a signal strength meter on the back with 4 LED’s so you can tweak the position for best signal. In my experience the LED’s are hard to see in daylight and didn’t really help that much.

My choice was the 8dbi antenna to try and if I found I was left wanting then I could send it back to change for the 11dbi and pay the extra.

The antenna also comes with a PoE injector which is 240v mains electric so is not needed. More on PoE later… 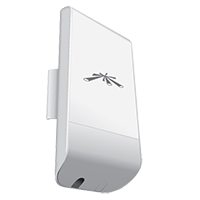 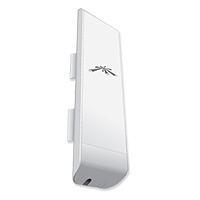 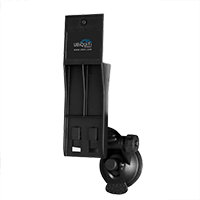 Photos above show the 8dbi antenna (left), 11dbi antenna and the suction mount.

This small device (around 5 x 6 x 3cm) connects via the network cable to the antenna. It takes the signal from the antenna and creates its own private wifi signal which your devices then connects to. There are several different airGateway devices available including one with an external antenna and a PRO model but I choose the basic model with the internal antenna as it only needs to be used within the small confines of my motorhome. It’s also cheaper! 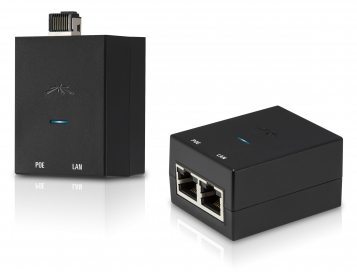 You can buy the AirGateway from Amazon HERE.

This is a method of using normal network cables (aka Ethernet cables) to power devices with low voltage over short cable runs. Both the above devices will work from a 12v DC power source such as my leisure battery and consume around 500mA which is pretty low. I ordered what’s called a PoE injector from ebay. This takes the 12v DC from the battery and injects it down the network cable to the airGateway and then passively onto the antenna. Thus minimal cables are needed. The PoE injector comes as a pair of cables – see the left photo below – and only the left hand one with the female DC socket is needed. 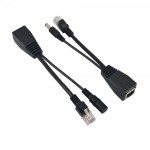 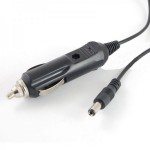 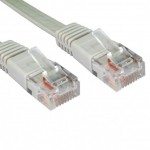 You can buy the PoE adaptor from Amazon HERE (left photo)

You can buy the 12v power lead HERE (middle photo)

The items have now arrived and took about 1 hour to set them up. Some extra trial and error configuration changes to optimise the results and it all working fine. However on a field test, the new 8dbi antenna did not pick up as much weaker signal as my old usb antenna. The old usb antenna is rated at 36dbi which I never quite believed but its certainly better. So the 8dbi is being exchanged for the 11dbi antenna. The difference between 8 and 11dbi does not sound much but the db scale is logarithmic so 8 to 9 is double and so on.

Here’s the steps to setting up the Ubiquiti hardware

There are videos showing each step to view and its a good idea to view the videos at full screen to see more detail. I had a bad cold when making these videos so I hope I am clear!

Step One – Setting a static IP address on your computer

Vast majority of computers will use a dynamic IP address to connect to the internet. To connect to the antenna we will need to change the IP from dynamic to static. The new static address should be set to 192.168.1.10. This only need to be changed for this single setup and will be changed back in step 4. 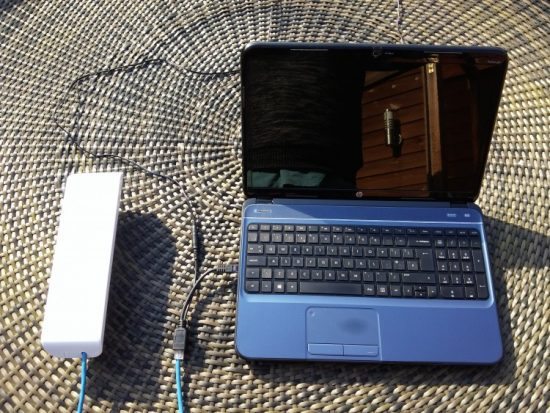 Step Three – Connecting the antenna to a wifi access point

In this step I show you how to connect your antenna to a wifi access point. At this point we do not have the AirGateway connected and we are just testing that the antenna can connect properly.

Step Four – Changing your static IP address back to dynamic

Next you need to disconnect the antenna cable from your computer and connect it to the PoE socket on your AirGateway, then attach the DC power to the PoE adaptor and plug that into the AirGateway. The AirGateway should have a white LED which lights and after approx 40 seconds will turn blue meaning the device is ready to be used. Next we connect via wifi to a the AirGateway access point which is called www.ubnt.com. At this point this is an open connect and no wifi password or key is needed.

Once connected, open your browser window and connect to IP address 192.168.1.1. Login to the device with login of ubnt. Next change the password on the device. This is not the wifi password but the password on the device. Next change the SSID or name of the device. Make this something you can remember. Next add a wifi password. This must be a minimum of 8 characters. Then reboot the device. Connecting to this via a browse ris pretty much a one-off setup so once completed you don’t need to do this again. The photo below shows how the antenna is connected to the AirGateway. 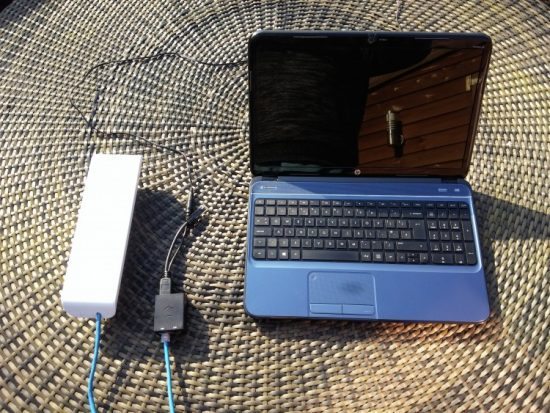 Step Six – Connecting to a wifi access point via the AirGateway

At this point it is probably best to reboot all your devices – computer, antenna and AirGateway. Then start everything back up and connect to the new wifi access point you created earlier. Connect your browser to IP address 192.168.2.1 which is the IP address of the antenna. Then select your prefered wifi access point and connect.

I have added links to the different parts on Amazon but in truth I bought mine from different suppliers such as ebay and Broadbandbuyer.co.uk